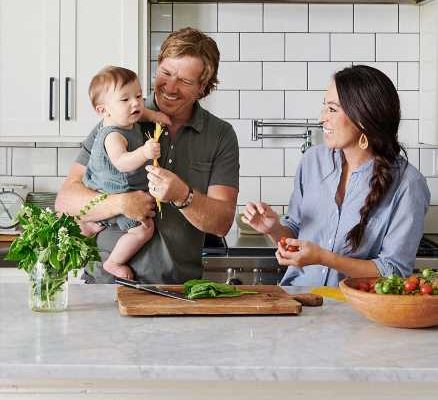 Joanna Gaines on Why She Won’t Separate Work and Family: It Makes Me a “Better Mom”

The Gaines children were a huge help when it came to finalizing the recipes for their mom’s Magnolia Table, Volume 2 cookbook, out April 7.

“Whatever I made I would have them try,” Joanna tells PEOPLE. “It was funny because with the first cookbook, it was all recipes they had eaten numerous times, but these were new flavors that felt a bit more elevated.”

“I remind myself of a kid, so I knew exactly what was going on [with their reactions]: They wanted what was familiar, but it was fun to push them to be open-minded,” says the mother of five.

“We have always raised the kids to be thankful for what’s served. It can be a struggle, but when I cook something, I tend to just cook it, and hopefully they will eat it. They give me feedback,” Joanna adds.

“I also make them a big part of the meal-planning process,” she explains. “Sunday nights I let each of them pick a recipe for the week. Everyone gets a say. I feel like that’s how you set up a win.”

Ahead of the fall launch of the couple’s television network, Joanna recalls their time spent as a family on Fixer Upper, which was much different than what she and Chip, 45, are planning for their immediate future.

“Anytime you shoot anything in the home, there’s multiple lights, cameras and production people. I didn’t like the idea that our home became a set,” she says. “I promised myself that my home will never be that again. I want home to be home, a safe place for the kids without this disruption.”

For more on Chip and Joanna Gaines, pick up the latest issue of PEOPLE, on newsstands Friday.