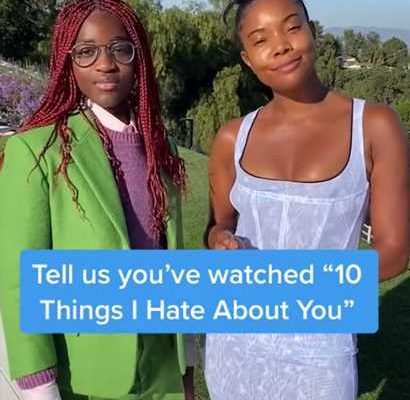 Zaya Wade is following in her stepmother Gabrielle Union's footsteps!

The pair recreated a scene Union, 48, did in the 1999 movie 10 Things I Hate About You for a video on TikTok Tuesday. The clip then shows Zaya reciting the lines, "I know you can be overwhelmed, and you can be underwhelmed, but can you ever just be whelmed?"

"I think you can in Europe," Union said, channeling Stratford.

The actress and her stepdaughter – whose dad is NBA star Dwyane Wade – have a tight knit relationship and often play around on TikTok.

Union discussed how she finds Zaya "wildly inspiring" following the 13-year-old coming out as transgender.

"It's beautiful to watch truly free children," she said in a joint profile with Wade, 38, for the 2020 TIME 100 last September. Union said Zaya "has the freedom to be exactly who she is, who she was born to be, to be her most authentic self."

The Bring it On star added, "She doesn't ask permission to exist. It's wildly inspiring."

In addition to Zaya, Union is the stepmother to Wade's other two children  Zaire Blessing Dwyane, 18, Xavier Zechariah, 6.