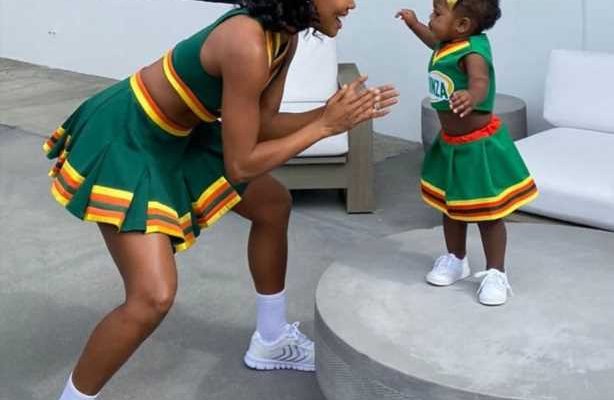 Gabrielle Union‘s daughter is following in her mother’s footsteps — just in time for Halloween!

On Sunday, the actress shared a series of photos of herself and daughter Kaavia James, who turns 1 next month, wearing matching costumes inspired by Union’s beloved 2000 cheerleading movie Bring It On.

In the four sweet images, Union and Kaavia pose for the camera while wearing green Clovers cheerleading uniforms complete with gold bows and white sneakers.

“Brought It,” Union, 46, captioned the pictures, adding the hashtag “#CaliforniaLove.”

The star also shared a hilarious video combining one of her famous scenes from Bring It On with footage of her and Kaavia recreating the cheer. “Ice Ice Ice… It’s COLD asf,” Union wrote underneath the clip.

The America’s Got Talent judge and her husband Dwyane Wade welcomed Kaavia via surrogate on Nov. 7, 2018.

Want all the latest pregnancy and birth announcements, plus more celebrity parenting news? Click here to get those and more in the PEOPLE Parents newsletter.

This isn’t the first time that little Kaavia has channeled her mom’s famous role.

Last month, Union shared photos of her daughter dressed up in the green cheerleading outfit while visiting her hometown of Omaha, Nebraska.

“Bring it!!” the actress captioned the photos, smiling ear to ear while looking at her daughter.

“Thank you @runzarestaurants for @kaaviajames Runza Clovers outfit to kick off her very 1st visit to #Nebraska 🏈👼🏾,” she added of the outfit.

Another series of photos were posted to Kaavia’s own Instagram account, featuring the child modeling the outfit and admiring her reflection in the mirror. “Of course I brought it,” the caption said.

Earlier this month, Wade, 37, jokingly explained to PEOPLE that Union is the brains behind Kaavia’s witty social media captions after he didn’t quite nail it.

“I did one caption and my wife was like, ‘Never again. Don’t ever touch it again,’ ” the retired basketball pro joked, sharing that his daughter has “my wife’s personality with my facial expressions.”

“It’s a cool combination, but it’s like … it’s hilarious,” he added of his wife’s #ShadyBaby hashtag. “She’ll send me some of [the captions] before she puts them on and I’ll be dying laughing because it’s so on point, you know? So it’s cool.”