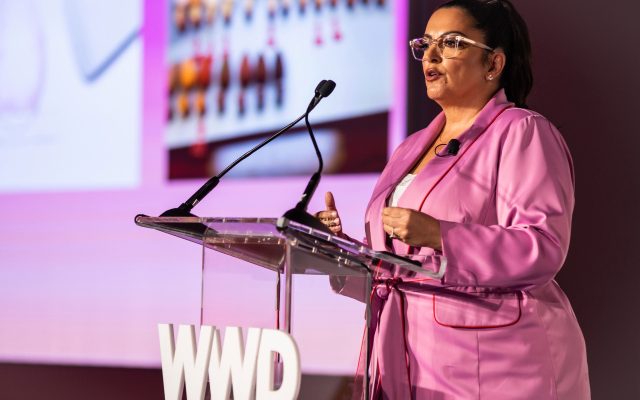 Rea Ann Silva knows what it’s like to be the only one in the room — and The Smithsonian is recognizing her for that.

Silva is one of eight businesswomen featured in a new display that is part of The National Museum of American History’s celebration of the “Year of the Woman.” Silva is featured alongside Mary-Dell Chilton, Myrtle “Tillie” Ehrlich-Weisberg Lewis, Rebecca Lukens, Lena Richard, Sara Sunshine, Lillian Vernon and Maggie Lena Walker, whose entrepreneurship spans three centuries.

Titled “The Only One in the Room,” the display, which opens Nov. 20, is part of the museum’s “American Enterprise” exhibition. Lead curator Crystal Moten said she was drawn to Silva’s “trajectory as a businesswoman” and her work as a makeup artist on the TV show “Girlfriends” in the early Aughts.

“[‘Girlfriends’] broke barriers in that it was telling the story of four Black women, four girlfriends,” Moten said. “The content was groundbreaking, but also, the technical aspects of production and the cosmetics and makeup. That also being the moment in which [Silva is] creating this new beauty tool that then burst on the scene and everybody wants it. Rea Ann’s story is one that exposes lots of connections between beauty, business, stories of diversity and achievement in the cosmetics world, in the entertainment world.”

As a Latina businesswoman with no formal training in makeup artistry, Silva has found herself to be “the only one in the room at many different points in my life,” she said in an interview.

“Being a makeup artist, I was the only one without a huge résumé, but I believed that I retained the talent, the vision and the artistry to be able to compete at that level — and I eventually did get there,” she said.

“Being a woman of color looking the way I look, people don’t look at me and say, ‘She’s Black, she’s white.’ They look at me and they don’t know what I am,” Silva continued. “I was the only one in the room having to defend [that] I am a person of color [who] can do all of these things. It took 25 years of my career to get that across.”

When she first created Beautyblender, Silva again found herself alone, this time defending why beauty shoppers should pay $20 for a sponge — a product that was previously complementary to items such as compacts or foundations.

“You will spend money for your brush,” said Silva, who remains Beautyblender’s sole owner. “Spend money for a tool that works and was created by a makeup artist.”

Asked to share advice for aspiring women entrepreneurs, Silva warned against looking “at entrepreneurship as a straight line.”

“You’re not going to ascend from the beginning,” she said. “You’re going to go through dips and valleys, but if you have the right perspective and you keep passion on your sleeve, that is going to be what carries you from the valley to the peak.”

Additionally, she suggests identifying mentors or “people who have walked similar paths who will be generous enough to be honest and share the journey with you.”

“Listen. Don’t say ‘that’s not going to happen to me’ because it can all happen to you,” she said. “You have to be a sponge.”