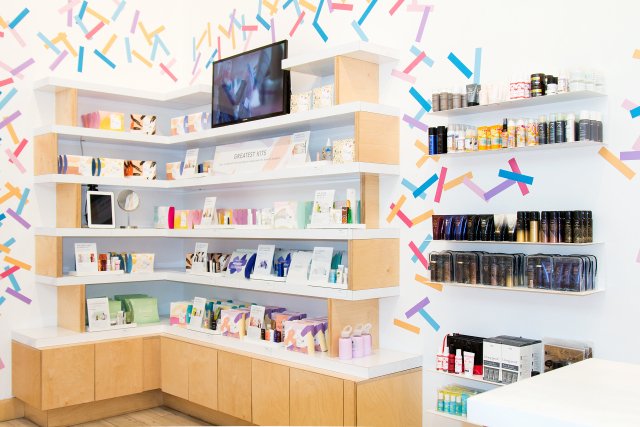 Birchbox's SoHo store will close at the end of December, according to chief executive officer Katia Beauchamp.
Birchbox's first stand-alone location, it opened in 2014.
The closure comes shortly after Birchbox teamed with Walgreens, which bought a minority stake in the business. In early December, the business launched 11 shops-in-shop in Walgreens stores, ranging from around 400 to 1,000 square feet.
"Our lease was coming to an end, and prior to having this plan with Walgreens, which in the past six months just happened, we thought we'd extend the lease," Beauchamp said. "We had an opportunity to say, 'We learned something in SoHo,' we can evolve and make it even better with Walgreens, and then we can do our own stand-alone off-line experience and start experimenting with something different."
Learnings from that SoHo space, particularly the merchandising of products by category, not brand, have been incorporated into the Walgreens shopping experience.
Right now, Birchbox is plotting what its next retail experience might look like, Beauchamp said. "There are still a lot of, in my mind, questions as to what is going to unlock the level of engagement that we want to see, and how the transactions should work, whether it's really important that they happen in a store or they can happen online," she said.
For 2019, Birchbox will test pop-ups, she noted, noting he company is also testing new concepts overseas.
The company is also looking to start building its internal team again, Beauchamp said.
Back in 2016, Birchbox instituted a series of layoffs as demands from venture capital investors switched from growth to profitability. Around that time, the business also scrapped its retail rollout plan.
But since then, Birchbox has been able to reach profitability, and has had several key wins — like landing MAC Cosmetics — along with a growth investment from Viking Global, which bought a majority stake in the business earlier this year.
Source: Read Full Article