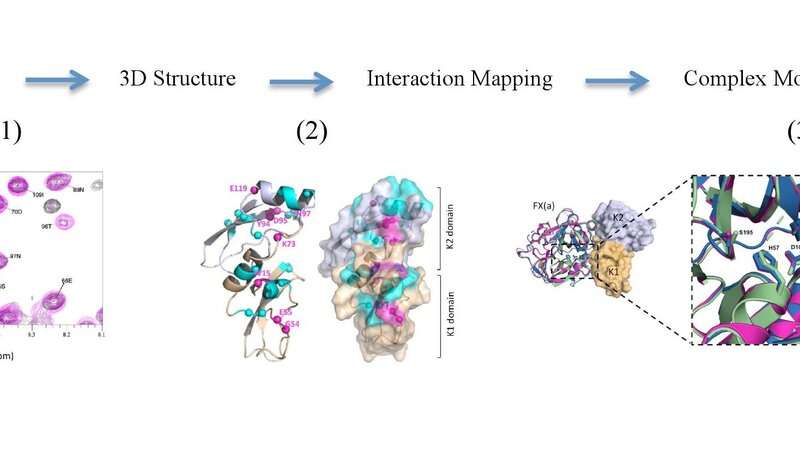 A collaboration between researchers from Brazil and the United States may open new avenues for the treatment of thrombosis, the leading cause of death among cancer patients. In a study to be published in Blood, the scientists describe the Ixolaris structure, an important anticoagulant protein found in tick saliva, and its interaction with Factor Xa, a key enzyme in the process of blood clotting.

Ana Paula Valente, Viviane de Paula, Robson Monteiro and Fabio C. L. Almeida, of the Federal University of Rio de Janeiro, in collaboration with Nikolaos Sgourakis, of the University of California, Santa Cruz, and Ivo Francischetti, of the National Institute of Health, in the United States, conducted the study.

The anticoagulant effects of Ixolaris were already known, but this is the first description of the molecular mechanism of its action on the functioning of Factor Xa, an enzyme that plays a crucial role in the blood clotting. Using nuclear magnetic resonance, the researchers were able to construct a 3-D model of the structure formed by the association of these two proteins.

The unprecedented result brings important insights into understanding the molecular mechanisms behind hemostasis, a complex process that regulates blood clotting and whose malfunction can lead to thrombosis. The expectation is that, from such a study, it will be possible to develop drugs capable of interrupting the formation of clots without interfering in the process of hemostasis as a whole.

The chain of phenomena leading to blood clotting involves several proteases, enzymes like Factor Xa that act by activating or inactivating other proteins. “The challenge is to develop a specific inhibitor that does not interfere with other similar enzymes of the body. Ixolaris has the advantage of binding to a non-canonical site, that is, a site more specific to that enzyme,” explains Ana Paula Valente, professor at the Federal University of Rio de Janeiro.

Understanding these structures and their mechanisms is crucial for the advancement of studies in the area. “The structural information about these complexes is scarce because they are huge and challenging systems. The great merit of this study is that we have been able to obtain relevant molecular information from such a difficult system,” says Valente.