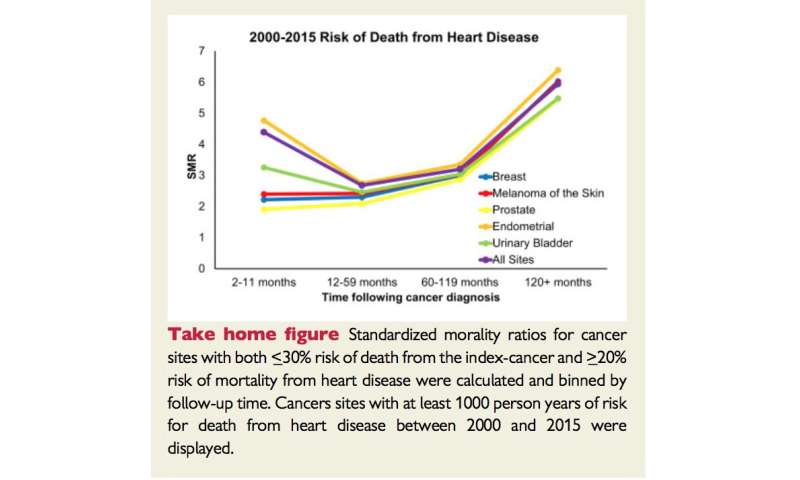 More than one in ten cancer patients do not die from their cancer but from heart and blood vessel problems instead, according to new research published in the European Heart Journal today. For some cancers, like breast, prostate, endometrial, and thyroid cancer, around half will die from cardiovascular disease (CVD).

Dr. Nicholas Zaorsky, a radiation oncologist, and Dr. Kathleen Sturgeon, an assistant professor in public health sciences, both at Penn State College of Medicine and Penn State Cancer Institute, Hershey, Pennsylvania, USA, and colleagues compared the US general population with over 3.2 million US patients who had been diagnosed with cancer between 1973 and 2012.

They used information contained in the Surveillance, Epidemiology and End Results (SEER) database to look at deaths from CVD, which included heart disease, high blood pressure, cerebrovascular disease, blocked arteries and damage to the aorta—the main artery carrying blood from the heart to the rest of the body. They adjusted their analyses to take account of factors that could affect the results, such as age, race and sex, and they looked specifically at 28 different types of cancer.

The majority of CVD deaths occurred in patients with cancers of the breast (a total of 60,409 patients) and prostate (84,534 patients), as these are among the most common cancers to be diagnosed. In 2012, 61% of all cancer patients who died from CVD were diagnosed with breast, prostate, or bladder cancer.

Patients who were more likely to die from cancer than from CVD were those with the most aggressive and hard-to-treat cancers, such as cancer of the lung, liver, brain, stomach, gallbladder, pancreas, oesophagus, ovary and multiple myeloma.

This is the largest and most comprehensive study looking at deaths from cardiovascular disease among patients with 28 types of cancer with over 40 years of data. Other, smaller studies have looked at the risk of death from CVD in some specific cancers, but none have looked at so many cancers with such a long follow-up.

Dr. Sturgeon said: “These findings show that a large proportion of certain cancer patients will die of cardiovascular disease, including heart disease, stroke, aneurysm, high blood pressure and damage to blood vessels. We also found that among survivors with any type of cancer diagnosed before the age of 55 years, the risk of cardiovascular death was more than ten-fold greater than in the general population.

Dr. Zaorsky said: “Clinicians need to be aware that the majority of cardiovascular disease deaths occur in patients diagnosed with breast, prostate or bladder cancer. Thus, clinics that aim to open “cardio-oncology” centres should likely focus on the inclusion of these sites, followed by the other sites listed above. Additionally, primary care physicians and cardiologists may seek to control cardiovascular diseases more aggressively in cancer survivors.

“As the number of cancer survivors increase, the rate of cardiovascular deaths will continue to rise.”

He said the reason why cancer patients were more at risk of dying from cardiovascular disease within the first year of diagnosis might be because when they entered the hospital system, other illnesses and problems, such as heart disease, lung dysfunction and kidney failure were also detected. It could also be explained by the aggressive treatment that follows a cancer diagnosis.

Dr. Sturgeon concluded: “We hope these findings will increase awareness in patients, primary care physicians, oncologists and cardiologists as to the risk of cardiovascular disease among cancer patients and the need for earlier, more aggressive and better coordinated cardiovascular care.”

Limitations of the study include the fact that the type of treatments the patients received was not known, including whether or not they had therapies that can be more toxic to the heart; the SEER database does not provide information on other illnesses and risk factors (such as smoking, alcohol consumption, obesity); the role played by socioeconomic status on the risk of cardiovascular death after a cancer diagnosis was not investigated. The study was carried out in the US population, so the risks may vary in different populations; the authors believe their findings are most applicable to Canada, Europe and Australia because the cancers and causes of death among cancer patients are similar.